An icy wind blows up from the valley below as we make our way down the steep mountain pass.

Dressed only in shorts and t-shirts, which were more than enough for the first 7 miles of hiking today, Julie — my hiking partner who is also my mother — and I know what the sudden arrival of frigid air means. We drop our heavy packs to dig out rain gear before the afternoon thunderstorm arrives. We’ve come to expect these High sierra storms to be short but intense.

If the count between lightning and thunder shrinks to one second or less it means the lighting is directly overhead. We need to descend so that, if that happens, we can take cover in the forest at lower elevations . Currently we are surrounded, save a few hearty lone trees and bushes, by miles of rock. But the rain still has not arrived, so there is still time to get off the barren mountain.

Chatting about the snacks we have stashed in our rain pant pockets, we resume our quick but unhurried descent. Five minutes later, the first hail stones begin to fall. They are small stones, about the size of buckshot pellets, but they arrive without the customary and softer rain prelude. Our pace quickens. 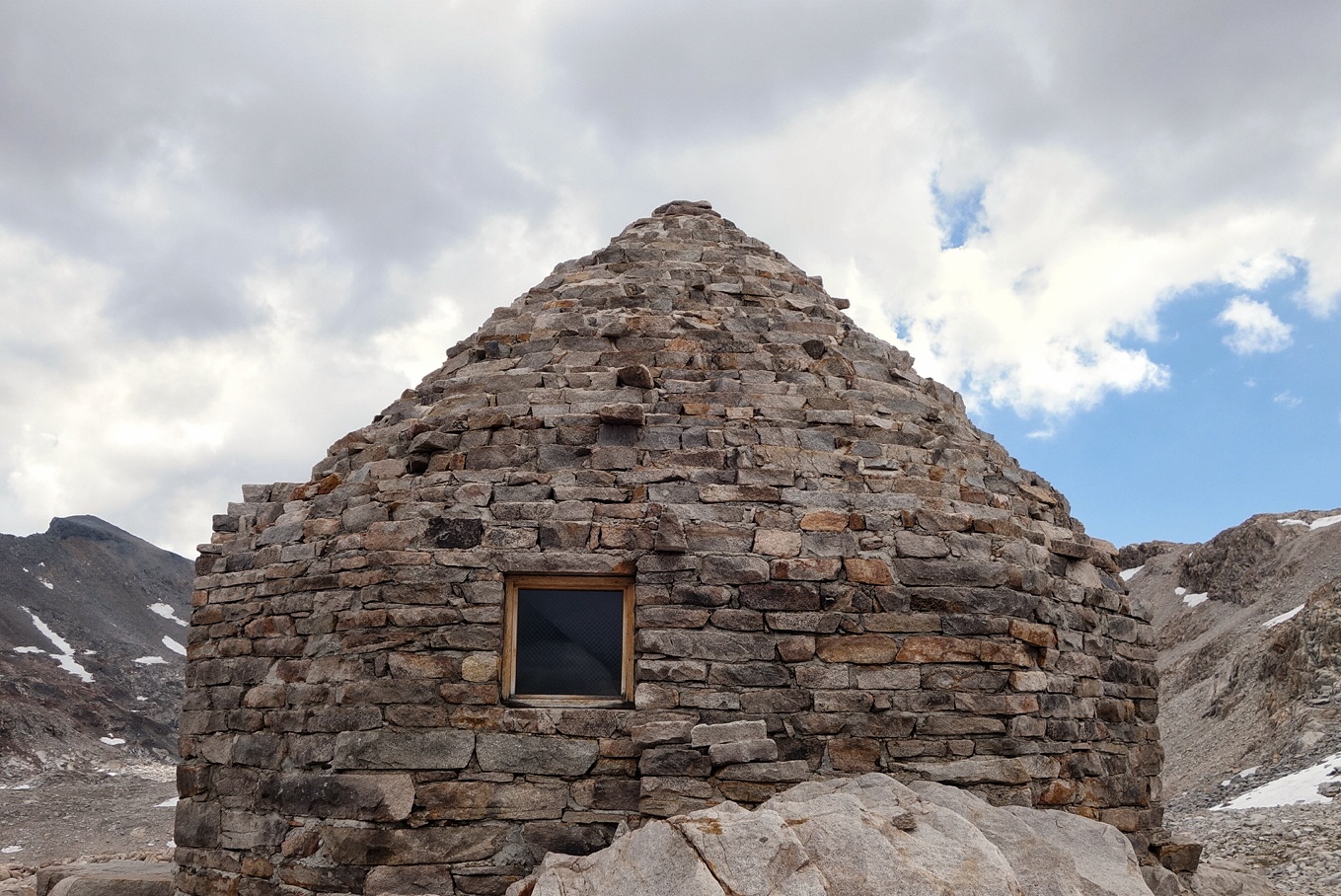 About one hour before the storm hit — Muir Hut, an austere construction atop the rugged Muir Pass, smells strongly of musty burlap sacs

As we round a sharp corner I notice another hiker a few switchbacks below taking off his pack and walking away from it. Thinking the stranger may be taking cover from lightning, I raise my gaze to the sky and wait for the ominous flash of light or hopefully-delayed crack of thunder. All I see is dark clouds. Satisfied that we are in no immediate danger, I focus again on the trail we are hustling down.

We have just moved onto another switchback. The anonymous hiker stands next to the trail, pants around his ankles and a few squares of toilet paper in one hand. He hasn’t seen me yet.

“Sorry for the interruption!” I shout.

The startled hiker hikes up his underwear and yelps. Julie and I power on around the next corner, our gazes lowered. Neither of us know why anyone would decide to take a dump right next to the trail in a hailstorm, but we don’t have time to ponder the question.

The onslaught intensifies, its ammunition upgraded from buckshot to marbles. Marbles, when thrown from on high, have a tendency to sting on exposed skin. Hoping to wait out a brief flurry, we huddle at the side of the trail. Instead of fading, the barrage escalates.

I move to the center of the trail, folding my knees and hugging them to my chest. “Try using your pack as a shield,” I call to Julie. She follows my example, though the stones still manage to land painful blows on our hands, heads, and legs.

The hail comes faster still. Already the ground is painted white with tiny balls of ice, the rock no longer visible. It looks like snow, and it is getting deeper.

About ten minutes go by. We can’t see each other without risking a marble to the face, so we call out “Are you okay?” back and forth.

Bent over and looking at her feet, Julie notices the carpet of hailstones begin to move. She looks up the train and finds out why.

“There’s a river coming down the trail, we need to move!” she yells.

We rush forward, still trying to shield our exposed hands from the falling ice. Ahead, the trail fords a creek. The river on the trail, pushing a plow of muddy ice, rushes past us to join the already swollen creek. More ice-mud-rivers appear from uphill.

The ford looks slippery, and we would normally switch to sandals before crossing, but there isn’t time. I tiptoe across the fast-moving water and Julie follows. We rush on, our boots and socks soaked through with ice and ice-cold water.

The day is far from over. 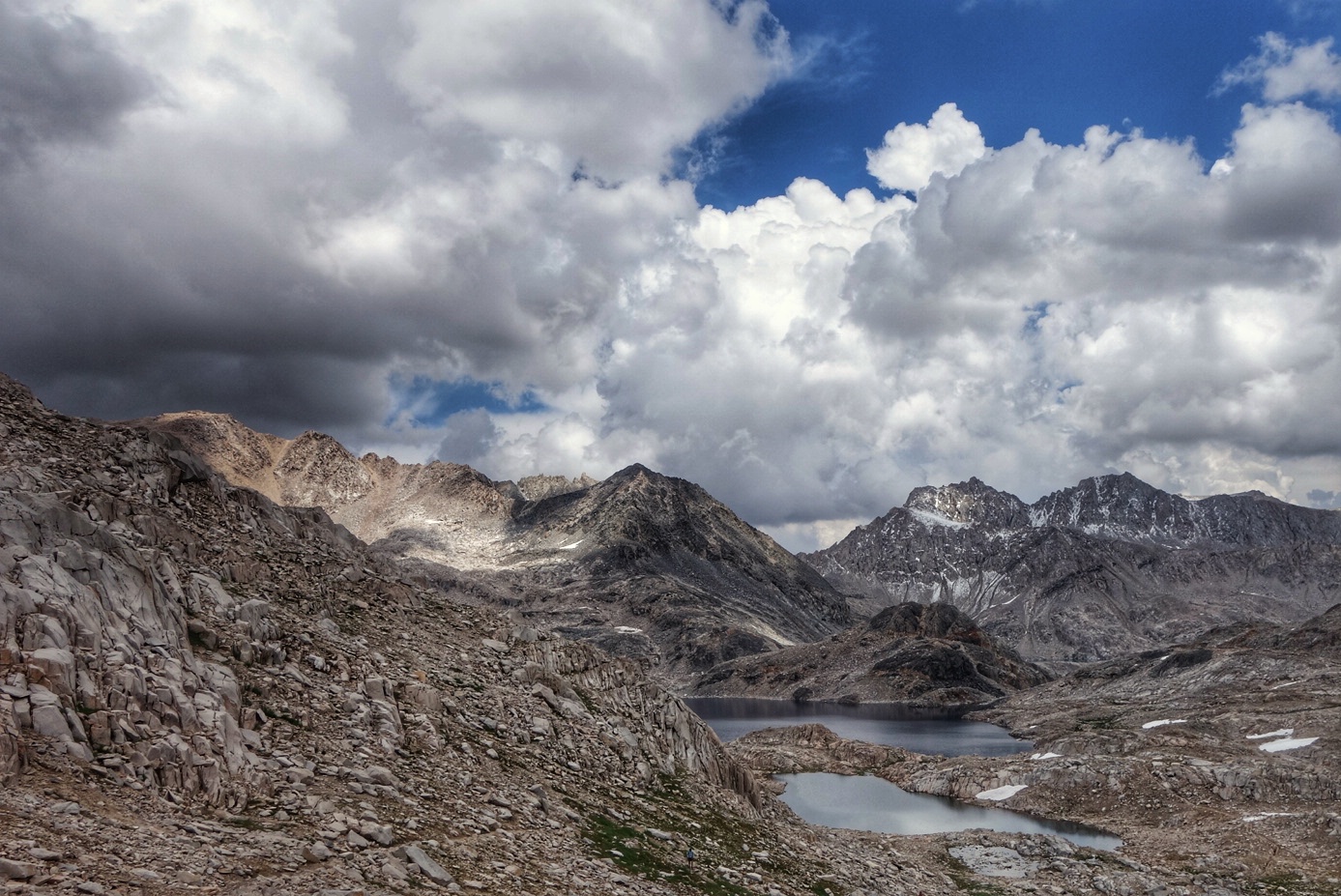 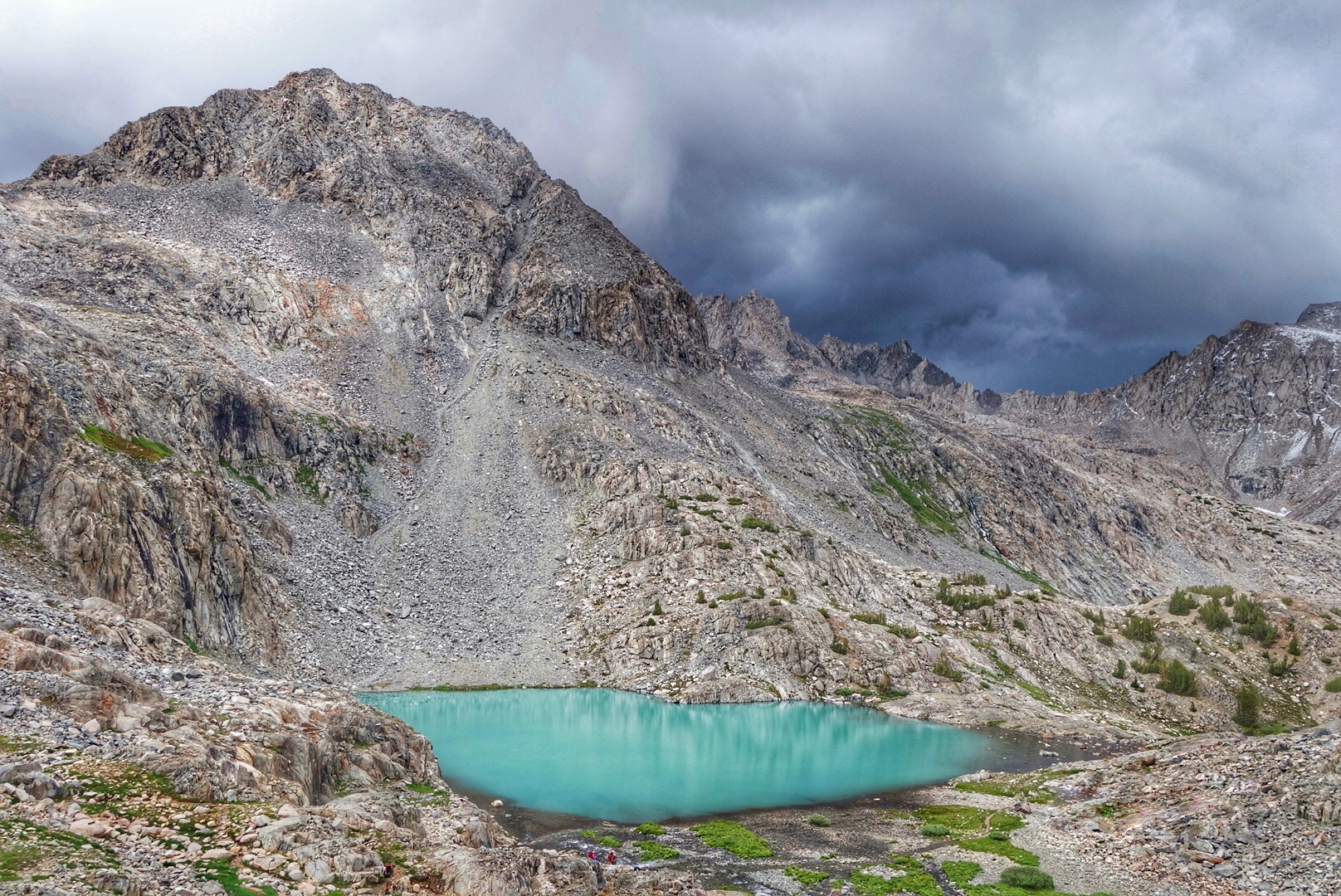 We’re jogging now, our boots occasionally disappearing into deep puddles of slurry where the trail once was. It is impossible to tell solid trail covered in hail from deep water covered in the same, and there is no time to test each step with our trekking poles.

The storm continues, hard ice still cascading down from the sky to form drifts and banks on the ground.

A flash of lightning to the South, the direction we’re heading, catches my eye.

My right foot crashes through a thin layer of hail into a half-foot of muddy water.

We barrel across another creek, also swollen, and continue our frantic descent.

Ahead, a small thicket of brush appears. Four hikers, a family we have seen before, are huddled there. The kids are barely hanging on to umbrellas, buffeted by the gusting wind.

The family begins to move downhill as we forge across another creek, catching up to them.

We slow down, matching pace with the fleeing family. The two kids — maybe eight and ten years old — are wearing tennis shoes.

“You’re just going to have to suck it up. Your feet are going to get cold. My feet are cold.” The father half-yells to his youngest, still unaware that Julie and I have come up behind him. Then, noticing us, “I couldn’t hear you at all!”

We pass the father and his son, the mother and daughter a few steps ahead. Everyone continues to barrel down the mountain.

The mother lets us pass, commenting on the suddenness, ferocity, and length of today’s storm. Our two groups splinter but stay close.

Trees begin to appear, still sporadic but a welcome sight.

“Shelter here or keep pushing down?” I ask.

“I think we need to keep moving”

There is ice in my boots. Julie’s hands are frozen. 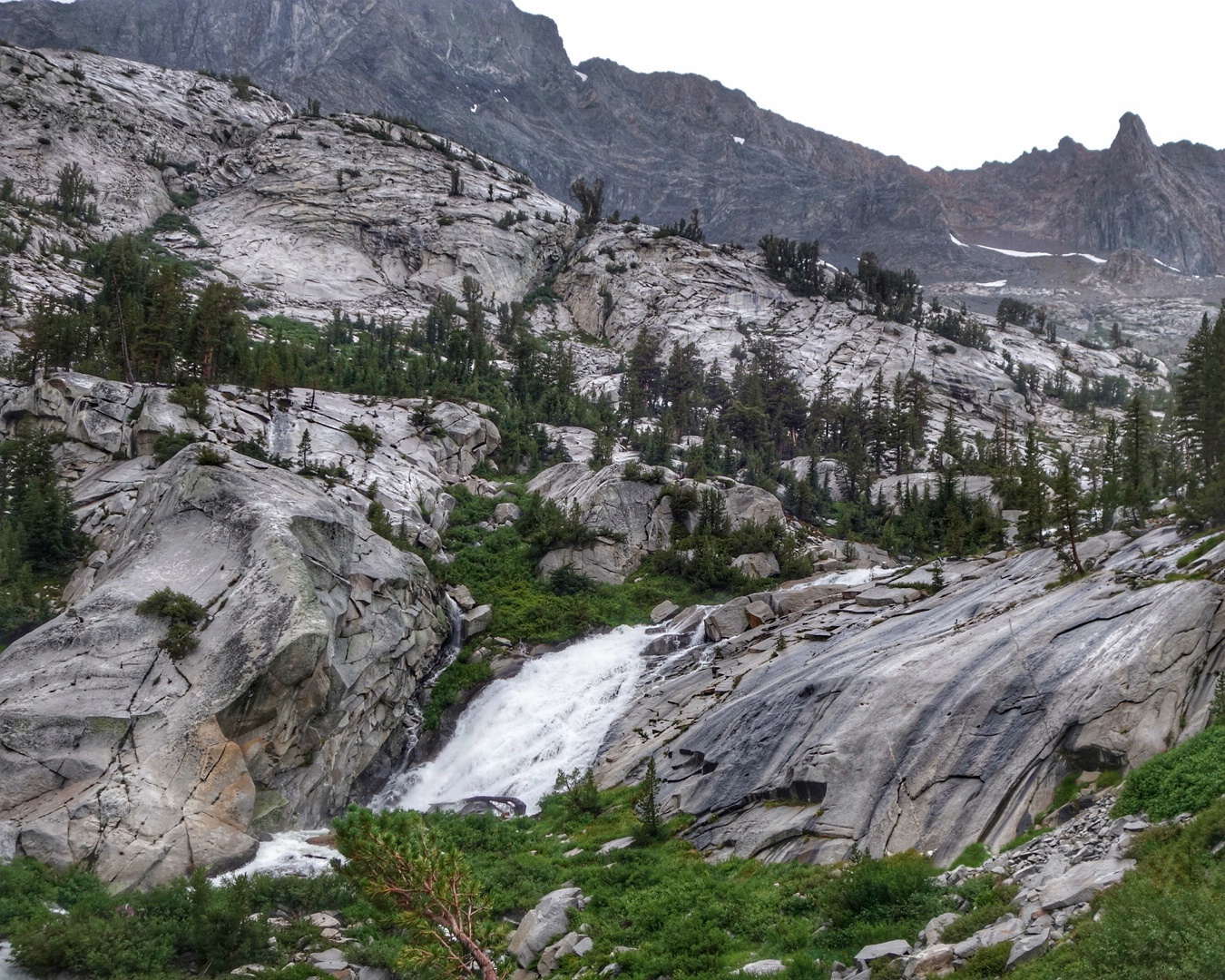 We come around a bend to a river crossing. What was probably an easy rock hop two hours ago is now a raging torrent, terminating in a waterfall. I evaluate three crossings, but there’s no way to avoid wading through the rushing water.

The family catches up and surveys the river. They don’t look happy.

Julie overhears the father say “We need to get out of this. Soon.”

Seeing no other options I plunge across, using poles to brace against the current. Julie follows.

The father makes the trip carrying two backpacks. He is obviously planning to carry his kids across next. We repeatedly offer help, but both mother and father refuse so we carry on down the trail, wishing them luck and safety.

For twenty more minutes the fast descent continues. Thankfully there is now ample tree cover and the lightning seems to have moved on.

The barrage finally starts to abate, turning instead to rain. We pass a camp with a half dozen hastily-assembled and soggy tents.

We continue to lose altitude, paralleling a massive waterfall funneling the downpour above into the valley below.

The trail has also become a river, alternating between a trickle of water and a torrent. At one point, it tumbles from one switchback to the next over a granite face as a two-foot-wide waterfall.

Finally, the rain has slowed enough that the trees provide some shelter.

“I need to keep moving, my hands are too cold,” says Julie. So we keep moving. 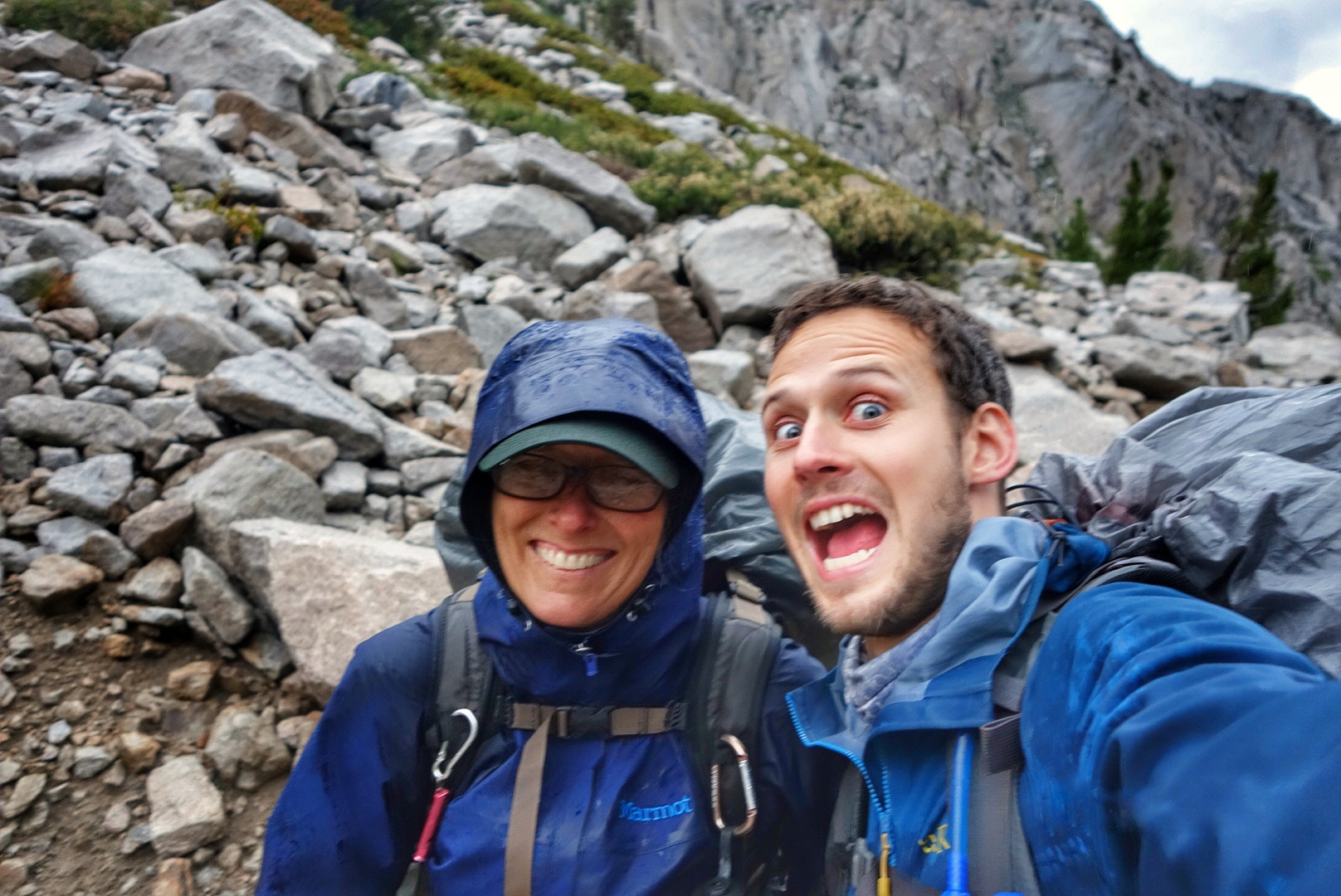 Relief mixed with disbelief and exhaustion. “Did that really just happen?”

A hiker appears, walking up the trail towards us. She smiles sympathetically, her braces prominently displayed.

“Did you see any tent sites recently?” she asks.

“There were some maybe a half-mile back,” I reply. We’ve been moving so fast, though, that it was actually more like two miles.

“Was that before or after the trail turns into a river?” she asks.

Julie catches up and provides better information. We wish the poor girl luck and pass the rest of her group huddled under some redwoods further down the trail.

Finally, we make it to camp by a skittle-yellow meadow. Just before she dips below the horizon, the sun manages to slip a few golden rays through dispersing clouds and thick tree branches to warm the spirits, if not the clothes, of two exhausted travelers. 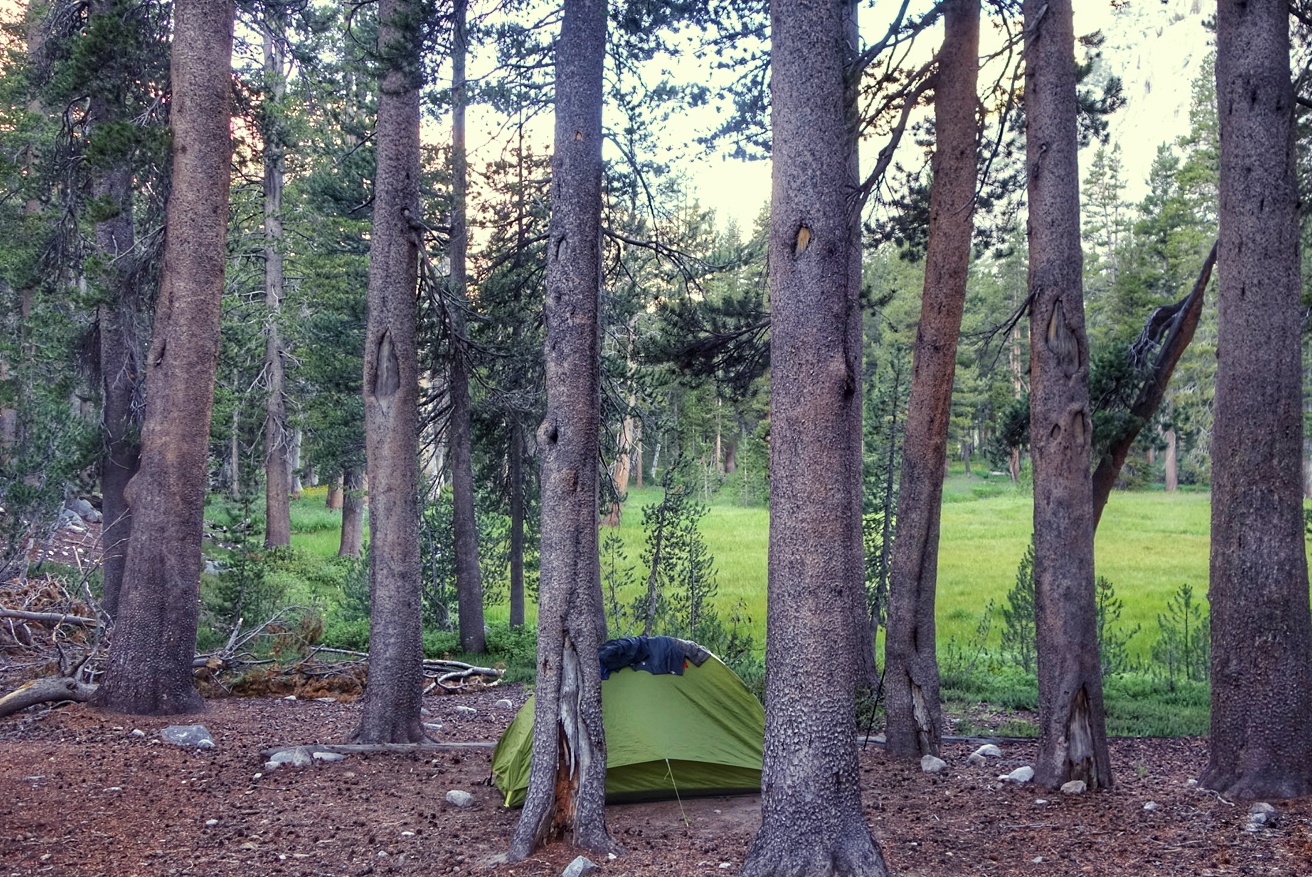 A futile attempt to dry layers at dusk

“Wow. That was quite the adventure for a 55-year-old lady,” my mom says as we sip whiskey-tea around the fire I started. It billows white smoke because all the wood is soaked through. 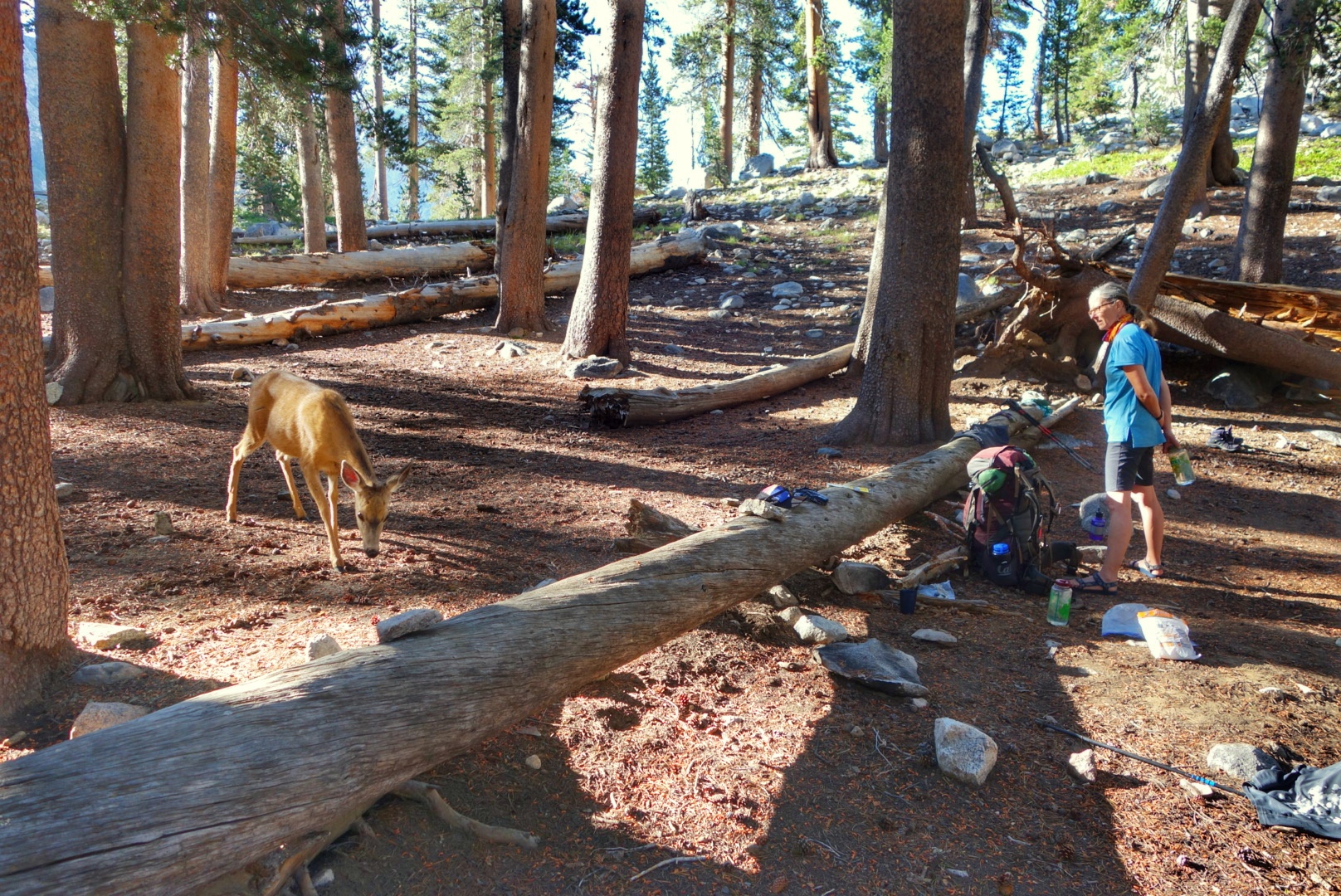 Dinner is a delicious rehydrated burrito. A doe, completely unafraid, makes curious overtures towards the newcomers, lending a surreal fairytale veneer to the scene.

“So, what about that guy shitting on the trail in a hailstorm?” I ask.

We laugh so hard we cry.